We use SHARE data on handgrip strength to estimate the effect of early retirement on muscle strength, an accurate predictor of disability and mortality. We find that workers who have retired earlier are more likely to suffer from reduced strength late in life. This supports policies postponing retirement age.

The population of most developed countries is ageing at unprecedentedly fast rates. This poses a challenge to welfare state provisions and calls for measures to promote healthy ageing. The ageing process is known to be connected with a loss of muscle mass and a reduction of muscle strength. Recent research has also shown that large losses in muscle strength accurately predict functional limitations, disability, and mortality. Moreover, reduced strength is a key element of sarcopenia, a geriatric syndrome involving a pronounced loss of muscle mass and strength, with a risk of disability, poor quality of life and death. The prevalence of the syndrome hovers around 50% among Europeans aged 70+, with relevant implications for medical care costs. Considering the current trend in population ageing, it is crucial to identify factors that help to preserve muscle strength in old age. We contribute to this goal by estimating the causal impact of the timing of retirement on handgrip strength loss in old age.

Recently, the governments of many developed countries have been changing their legislations and increased the minimum retirement age to cope with the fiscal consequences of population ageing. The potential impacts of these policy interventions on muscle strength loss are a priori ambiguous. On the one hand, the most relevant activity that keeps most young-old active is work, and early retirement anticipates disengagement from work. On the other hand, retirement reduces work-related physical strain and allows the young-old to have more time to carry out physical exercise, with a potentially protective effect on muscle strength.

We provide empirical evidence about this matter using data on handgrip strength for the European population aged 50+, collected in a harmonized way by SHARE. Our study exploits the longitudinal dimension of SHARE and the variation in minimum eligibility age for early retirement and old-age pension benefits across European countries over the last 40 years to estimate the causal impact of the timing of retirement on the decline in grip strength.

Figure 1 portrays the main results graphically. Our econometric model simulates how the percentage of individuals with muscle strength below the thresholds used by physicians to identify sarcopenia would increase with respect to its level at age 50 for workers retiring at 55, 60, and 65. The figure suggests that there is a protective instantaneous “honeymoon” effect of retirement on the probability of having low grip strength. However, the cumulated effect of retirement on the steepness of the strength decline makes workers who retired earlier fare worse than late retirees in terms of muscle strength for most of the age span we consider – and they do so by a sizeable amount. To illustrate, our estimates imply that an 80-year old person who retired at 55 is about 8 percentage points more likely to have low strength than a comparable 80-year old person who retired at 65.

Fig. 1: Estimated low strength prevalence by age for workers retiring at 55, 60 and 65 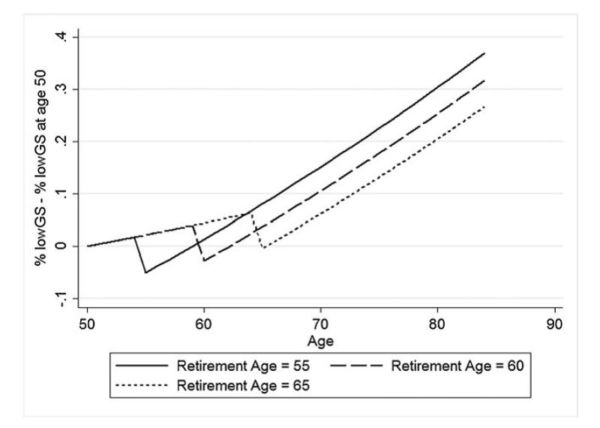 In additional results, we show that the short-term protective retirement effect is stronger for white-collar workers. We find that the negative long-run effect of the time spent in retirement on the age-related decline in strength is stronger for blue-collar workers and for males. Consistent with these heterogeneous effects, recent research has show that workers not employed in physically demanding jobs are more likely to carry out physical activities after retirement and that men retiring from strenuous jobs are more likely to gain weight after retirement. Also, time use across retirement seems to change differentially between men and women. We therefore speculate that changes in lifestyles after retirement may partly explain these patterns.

Our research has relevant implications not only for individuals approaching retirement age but also for policy makers. Our findings would in fact suggest postponing the earliest age at which individuals can retire and draw a pension and to promote interventions fostering physical activities in retirement, targeted at particular groups who are most at risk of losing muscle strength in old age. The task of designing successful interventions among the retirees would be facilitated if information on lifestyles and work histories was gathered within a standard instrument such as the comprehensive geriatric assessment that is commonly used by physicians to monitor and detect frailty among old people. 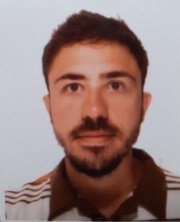 Marco Bertoni, Department of Economics and Management, University of Padua 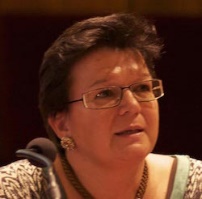 Guglielmo Weber, Department of Economics and Management, University of Padua