HOW ARE FERTILITY HISTORIES ASSOCIATED WITH CHRONIC CONDITIONS LATER IN LIFE?

Chronic diseases are the main cause of death and disability in Europe. Using SHARE data, we found that age at first birth is the most important fertility characteristic to predict the risk of chronic conditions later in life. However, there are important gender and cross-national differences that cannot be neglected.

Ageing is one of the most significant demographic phenomena of the modern industrialized world. In fact, life expectancy has been increasing – almost continuously – in every European country for decades. However, health inequalities among older people have become starker, and so heightened morbidity and longer periods spent with a lower quality of life have become serious threats for larger segments of the population. Chronic diseases – in particular cancer and diseases of the circulatory system – are the main cause of death and of disability in Europe, especially among older adults. Hence, it is critical to identify the risk factors that lead to health disparities at older ages.

Childbearing has attracted a lot of attention in the demographic, epidemiological, and ageing literatures, as a possible factor influencing health later in life. The consequences of fertility histories on mortality and health have been widely investigated. Past research has shown an association between fertility and physical and mental health outcomes in middle and old age, such as self-rated health, chronic conditions, and depression. However, most of the existing literature has either focused on a single country or on the comparison between two countries and has primarily used self-reported measures of health, without comparing these associations across different measures of the same health conditions. Thus, this research uses the Survey of Health, Ageing and Retirement in Europe (SHARE) to include several European countries and investigated the role of fertility histories in shaping health later in life. In particular, it analyzed chronic conditions, using both strictly self-reported measures of long-term illness and self-reported doctor diagnoses.

The analysis included 8,289 women and 6,420 men who were 50 years old or older in 2013, from 11 European countries: Austria, Germany, Sweden, the Netherlands, Spain, Italy, France, Denmark, Switzerland, Belgium, and Czech Republic.

Three different measures of health were used in the analysis regarding chronic conditions. The first measure was self-reported long-term illness. Respondents were asked, “Some people suffer from chronic or long-term health problems. By chronic or long-term, we mean it has troubled you over a period of time or is likely to affect you over a period of time. Do you have any such health problems, illness, disability or infirmity?” (yes or no). The other two measures were measures of chronic conditions as diagnosed by a doctor. Individuals in the sample were shown a card with a list of conditions (e.g. heart attack, high blood pressure, diabetes, dementia, etc.), and they answered the question, “Has a doctor ever told you that you had/Do you currently have any of the conditions on this card? Please tell me the number or numbers of the conditions.” The answer to this question was used to build (a) a variable equal to 1 if the respondent was diagnosed with at least one chronic condition, and 0 otherwise, and (b) a variable corresponding to the number of diagnosed chronic conditions.

Several independent variables representing the fertility trajectory were used in the analysis: number of children, age at first birth and age at last birth, length of birth intervals, and experiencing the death of a child. The use of multiple indicators on fertility offered a more detailed picture than just using parity, or age at first birth, and could help identify other aspects of childbearing that can be important risk factors for later health.

The results of the analysis – taking into account sociodemographic characteristics and early life conditions and health – revealed that age at first birth was important among women, since those who had their first child after age 20 and before age 35 had a lower probability of reporting long-term illnesses, and women experiencing the death of a child had a higher risk of long-term chronic conditions (Figure 1). Also, childless men had a higher probability of reporting chronic diseases than men with children (Figure 2). 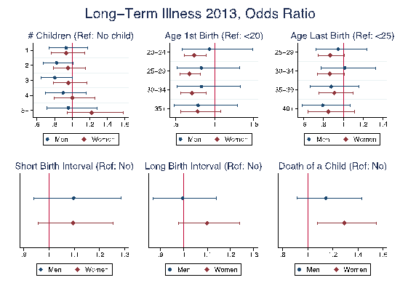 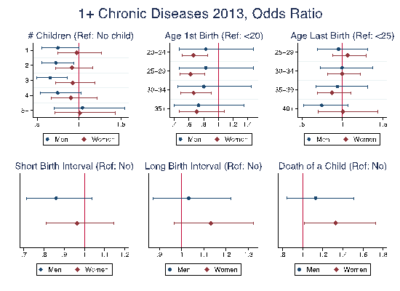 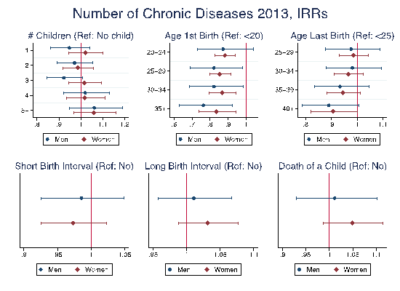 Looking at the analysis separately by country, findings show cross-country heterogeneity. In socio-democratic and continental countries, the association between fertility and chronic conditions is significant among women but not among men, suggesting a stronger physiological link between fertility and health later in life, and also an attenuation of negative social mechanisms related to parenthood (e.g. economic strain, stress), possibly through a more generous welfare system and more egalitarian gender norms. Given the less generous welfare regimes and lower gender equality in Southern and Eastern Europe, larger associations were expected in these countries; however, it was not the case.

The results of this study were useful to identify groups in the population that are more at risk of developing chronic conditions and unhealthy ageing. Findings show the importance of age at first birth among women: having a teenage pregnancy or having the first child after age 35 is associated with an increased risk of chronic conditions later in life. These recognized groups may benefit from tailored interventions or more health monitoring, in order to prevent future health complications. This is increasingly important, given current trends of fertility decline and increase in the age at childbearing, and given the phenomenon of population ageing that is taking place across Europe. 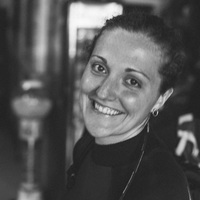