THE 2008 ECONOMIC CRISIS DID NOT DERAIL PENSION REFORMS

Pension reforms succeeded in delaying the age when people started to receive pensions. This shift took financial pressure of pension schemes. However, the economic crisis shrunk the size of the labour market, and now more people stop working before they start receiving pensions.

Populations across Europe are ageing. Policymakers are concerned that this development financially strains pension schemes and reduces the size of the workforce. To solve these problems, they reform pension schemes. The reforms increase the age when people can receive pensions, and they close loopholes through which people could receive pensions at an earlier age. The assumption is that these reforms will make individuals retire later. As a result, the workforce would remain sizable and pension schemes would have less financial difficulties.

While this solution strategy is absolutely logical and straightforward, it overlooks one fact: retirement is influenced by more than just pension regulations. When older individuals decide whether or not they should retire, they indeed to consider how much pension benefits they would recieve. In addition, they also consider how much they like their job, what their spouses and children do, how healthy they are, what they want to do with their lives, and many other things. Moreover, there have to be jobs available to them, and employers need to want to work with them. Consequently, all efforts that pension reforms make could be supported or hampered by a myriad of factors. Examples for these factors are a lack of available jobs, outdated work skills of the older individuals, ageist attitudes of the employers, or the wish of older couples to retire at the same time. Recently, the 2008 economic crisis created a new set of factors that could influence of effect of pension reforms.

The 2008 economic crisis was not only an economic phenomenon, it also had percussions on the lives of Europeans. It increased unemployment rates, especially in Southern and Eastern Europe, and it changed the attitude towards work. Even before the crisis, older individuls had difficulties to find new employment after becoming unemployment. With the 2008 crisis, their chance of becoming unemployed increased and their chance of finding new employment decreased even further. Additionally, the crisis make the unemployed doubt their chances of finding employment again, which led some older unemployed to give up on their job search and instead wait for retirement. But what happens when the 2008 crisis changed lives this way, while pension reforms tried to make people retire later? Did people react to the intentions of then pension reforms and indeed retire later? Or did they succumb to the pressure of the economic crisis and retire earlier? Or did both developments possibly even cancel each other out? 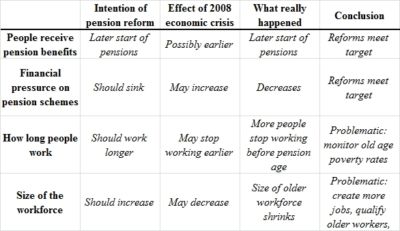 When the pension reforms coincided with the 2008 economic crisis, a second change occured: the number of people who worked right until they received pension benefits dropped. Three out of four individuals who started to receive pension benefits in 2005/2006 worked until they received pensions. In 2012/2013, in contrast, only half of the people who started to receive pensions did so. The persons who stopped working before they received pensions were, for example, unemployed, ill, or homemakers. Some of them were still trying to find work until they recieved pension benefits, whereas others did not. This means that not everybody who does not yet receive pensions is part of the workforce. Pension reforms succeeded in delaying when people start to receive pensions benefits, but they had a less direct effect on the size of the workforce. The reason is that preventing people from receving pensions is not the same as keeping them in employment. To keep them in employment, sufficient work opportunities need to be available, and they need to be accessible to older workers.

Taken together, pension reforms succeeded in delaying the age when people start to receive pensions – despite the pressure created by the 2008 economic crisis. Thereby, these reforms managed to take some financial pressure off pension schemes. However, a growing number of individuals stops working before they receive pensions. Such individuals who stop working earlier will receive fewer pension benefits later on. Policymakers still need to monitor whether this development increases the risk for old age poverty. Moreover, the early exists from the workforce mean that pension reforms are less effective in achieving their goal of increasing the size of the workforce. To reach this goal, they would need to ensure that there are enough jobs available, and that older people have the qualifications necessary for filling these jobs. To do so, pension reforms would need to be coordinated with labourmarket reforms and with strategies supporting lifelong learning. 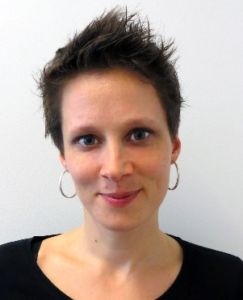